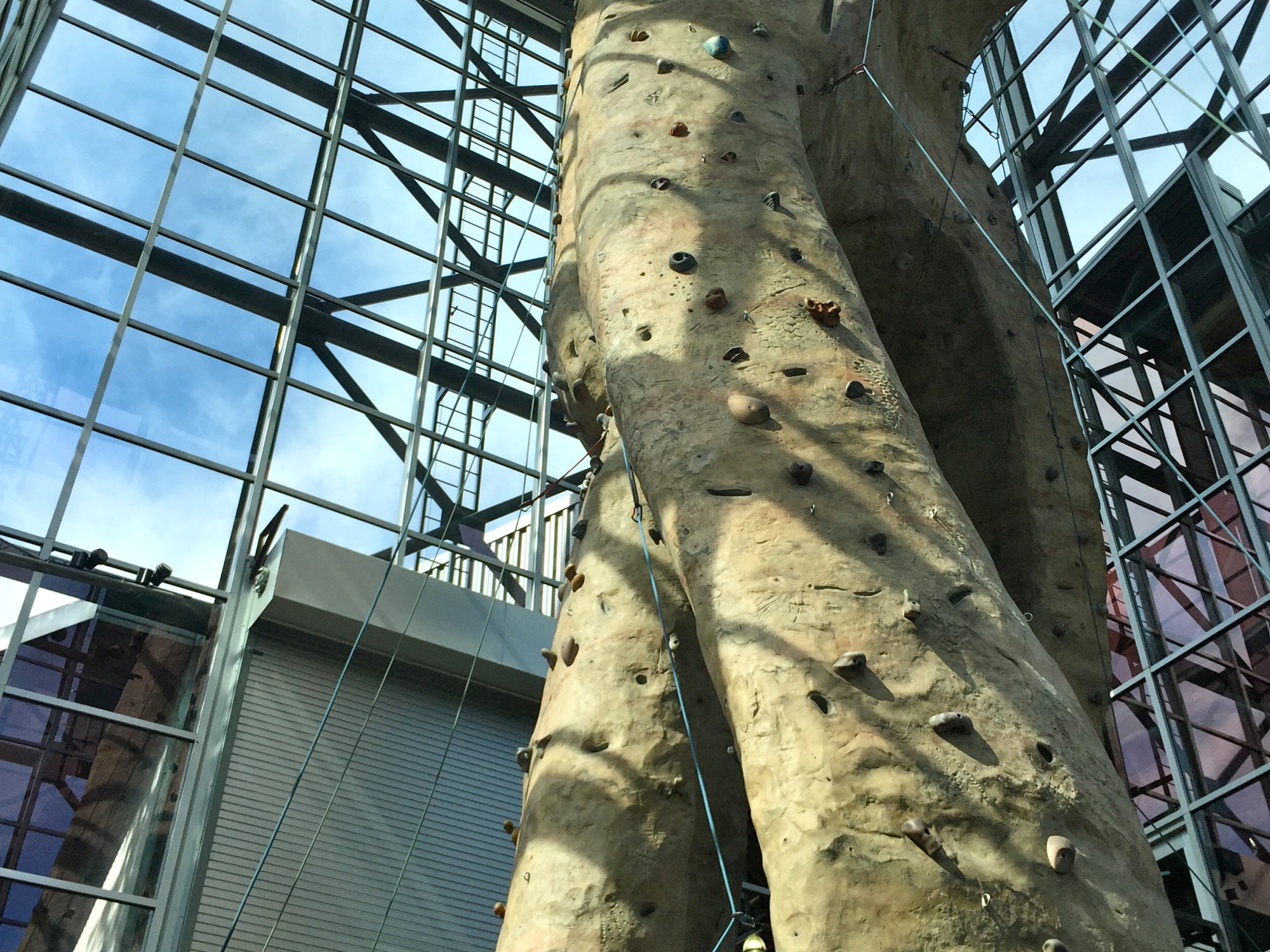 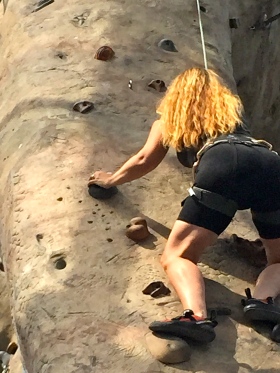 After my ill-fated snake holding adventure (#3 Hold a Big Snake), it’s been harder to face my 50 fears. The realization that I might just melt-down, be paralyzed, or feel actually stunted by the experience of facing (or attempting to face) a fear; has put a damper on things.

But the “first day of school” came and went last week. A teacher’s strike in Seattle kept my teenagers at home, and after the initial glee of bottomless bowls of cereal and X-Files binge-watching, the indulgent laziness wore off. A PSAT prep book was cracked. Rooms were organized. And I suggested we face one of my fears: #44 Rock Climbing.

“Let’s go to the pinnacle at REI” I suggested. The pinnacle is something of a landmark in Seattle. So large you can see it from the freeway; a giant, man-made rock phallus encased in glass that bursts up alongside the massive store; big, hard and…well…erect.

Standing 65 feet tall, the REI Rock Climbing Pinnacle has been an iconic feature of the Seattle landscape since the REI Flagship store’s grand opening in 1996. Pinnacle climbers are treated to spectacular views of the Seattle skyline as well as peek-a-boo view of the surrounding mountains on a clear day.

In my mind, doing just this much will be a win. It will change a pattern of 50 years. Of reflexively saying “no way”. If I can only get 3-feet up, fine. At least I got started.

And at least I was willing.

While I sign the liability waiver, Hugh (who has agreed to come with me) breaks the news that he won’t be joining the fun. “I guess you’re just going to have to face this fear on your own” he says. Denizens of the REI universe hear this, and perk up:

“This is a fear? That’s fantastic!” and “Good for you!” the customer service counter choruses.

The REI employee manning the Pinnacle is straight out of Central Casting. Dave is tan, outdoorsy and compact. I step into a harness identical to his, and he tugs the leg straps so tight that I wonder if I’ll have any circulation in my legs by the time I start climbing. Dave chats with me while he ties a beautiful spiraling knot in the rope that connects us:

“Look, you’re going to be great at this” he tells me. What gets people in trouble is they get into their head. What you want to do is climb all the way up one foot at a time. Like a ladder. One foot, one foot, one foot. If you start to think about it, it’s all over. Just. Don’t. Think.

Dave wants me to climb a few feet up, and then sit back, so I can learn how to come back down. He points at a bump. “When you get here, you’re going to sit back, okay?”

“Yup” I say. But what I’m thinking is, “That, Dave, is where I’m going to stop for the day. That’s going to be enough for me. Climbing. Check. Four feet up a wall. I’m okay with that.”

I step up on the first bumps and grab the bumps over my head. They’ve scattered plenty of these things around the first few feet. I can feel the harness and the rope pulling taught.

“Now sit back” Dave says. I do it. And can feel the rope holding me. “Just penguin walk down the wall” I do it and land in the gravel.

“Excellent!” Dave enthuses. When I was little I hated this kind of encouragement. There was nothing more humiliating than coming in last, while people cheered. Blech. “Shut up” I’d brood darkly, “I don’t need your pity.”

But Dave is an expert encourager. Without protest I go back to the wall and climb again, this time past the four-foot mark. I forget my plan, and instead, I just go up, like Dave told me to. As if the wall is a ladder; without thinking. And then I remember my plan-

I notice that I’m very sweaty. Is that me? Or the windows surrounding me, like a greenhouse, making me hot? I hesitate.

“My arms are being weird…”

I fumble around for my next foothold but it isn’t there. I look down at my feet and see the gravel far below. I feel a clutching in my gut. I look out the windows and notice that I’m up above the buildings. Way above.

“You know, I think this is good.” I say it to the rock but I hope Dave can hear me. I’ve gone plenty far. Much farther than planned.

“You’re almost all the way to the top!” comes Hugh’s voice. And he sounds both far away and…wait for it…impressed. A teenager impressed with his mom? This is rare and special. Like a solar eclipse or a Sasquatch sighting, it’s not to be missed. I won’t let him down. I must keep going.

Near the top I get stuck. I can’t reach the next hand-hold. Dave calls up to me,
“Keep going”.

“Your next step is with your left foot. You have to jump your foot up there. When you do, you’ll be high enough to reach the next handhold.”

Jump. I’m snorting at the very idea of leaping vertically. He’s asking too much. But I can feel the tug of the rope. I don’t even know what it means to jump, but I do something-

“You did it!” Dave whoops. The rest is easy. I clamor up and ring the bell. The bell is awesome. I wish a bell waited for us every time we complete something hard. An audible signal, celebrating the fact that we did it. Especially when we let our willingness to start something, morph into our determination to finish it.

“Now sit back and come on down,” Dave says. 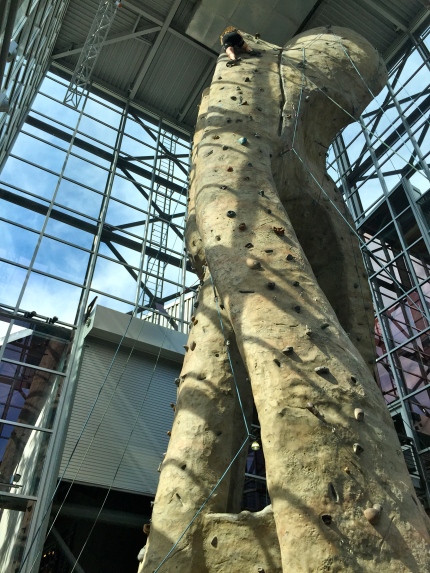 “I just need a minute” I pant. It seems like I should be sitting up here, having a snack. But Dave is adamant. He clearly  wants me to hurry on to the next part: the part where I’ll need to let go and lean back. Oh my God…

“Hold onto the rope in front of you” Dave’s voice is firm. I can take one hand off the wall, but the second one is putting up a protest as if to say, “Uh…Mare, you do realize that if I leave this wall you will no longer be holding on to the vertical face of a 65-foot cliff?” I nod to myself. “Copy that, Roger Wilco. You can let go, hand. Um, hand? Let go now. That’s an order”.

My second hand finally lets go. My upper body swings away from the wall. “Fuck!” I shout, as the rope keeps gravity from taking me on a long, Wile E. Coyote-style trip to the bottom. Instead, Dave lets out the rope and I step my feet down the rock, holding the rope in front of me. About halfway down, my sense of humor comes crashing in like the tide and I can laugh again. By the time my feet are on the ground I’m ebullient.

Hugh scrambles over and gives me a big proud hug. I’m dripping with sweat and my arms feel like lead but I’m grinning and triumphant.

Dave unties the knot between us. “That’s called climber’s euphoria. How do you like it?”

“Not bad” I say, giving him an appreciative (and sweaty) squeeze.

As Hugh and I leave REI, the customer service desk erupts: “You did it!” they chime. I wonder how they know. Did they hear me ring the bell? Or can they tell by the sweat?

But I decide they must be able to see it, written all over my face.

Hi, I'm Mary Elder. I'm a writer, living in Seattle. I turned 50 in January, 2015 and decided that what stands between me and a limitless life, is fear. I made a list of 50 things that scare me, and resolved to face all 50 of them. I invite you to follow my journey, and to make a list of your own 50 fears! View all posts by maryelder

One thought on “#44 Rock Climbing”